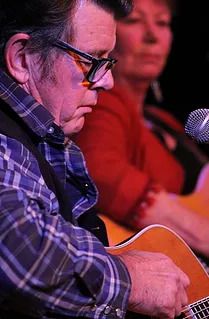 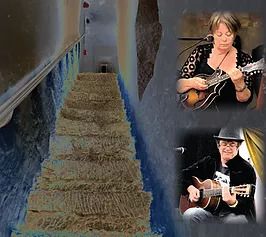 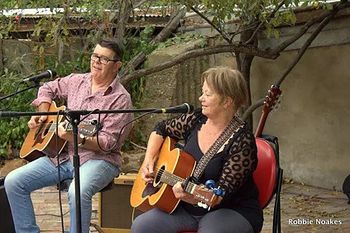 Marni Sheehan and Mark Smith’s new album, A Crazy Dream is a collection of songs that weave pictures and stories of their 40 plus years of performing and recording.
Marni and Mark first worked together in the legendary psychedelic blues band ‘Reuben Tice’ in the late seventies and have once again joined forces, this time to perform and record as a duo.
A Crazy Dream is rootsy blues, originals, alt & vintage country music featuring acoustic, electric, dobro and lap steel guitars, mandolin, percussion and stomp box.
Their Influences include early blues and jug band music, old timey and early country music, alt country, folk & protest songs. The original songs are stylistically in keeping with the roots flavour of their music.
Audiences love the sparkle, humour and occasional dark moment Marni and Mark offer, coupled with their years of experience and musicianship which add an extra element of authenticity and depth to their shows.

Marni has worked with many Melbourne bands including Stilletto, Tinsley Waterhouse, Eskalators, Lola’s Lost Weekend as a bass player/songwriter. She has a track record of songwriter credits including finalist placings in 2 ASA contests, the Cygnet Folk Festival Song & Tune Comp 2017, & The Austin Texas Songwriting Contest. Her work appears in two compilation albums as well as the albums of other artists such as The Stetson Family and Leslie Avril.

Mark has worked as lead guitar/vocalist in numerous bands in the Melbourne and Sydney music scenes since 1972, working in a variety of styles across many stages and artists. Mark has always had a strong interest in blues and roots music bringing his own combination of picking and slide into his playing style and repertoire.