Poteen - out on the ocean

For the first time, Poteen's seminal 1984 album, Out on the Ocean, is available online. 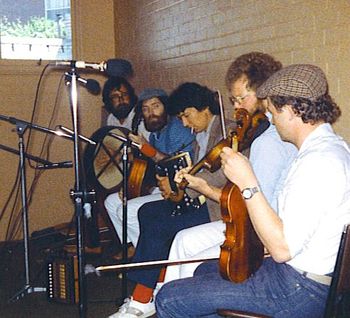 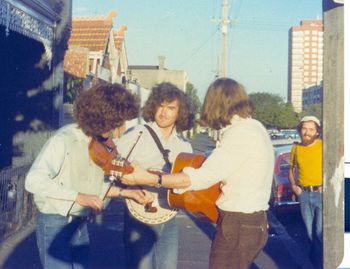 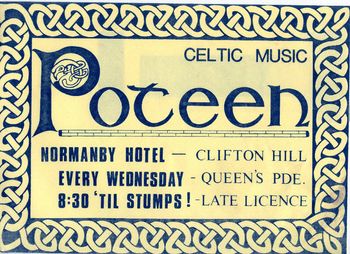 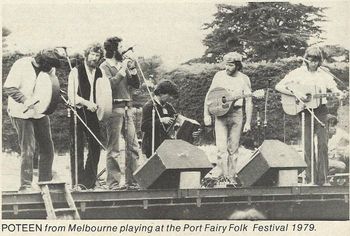 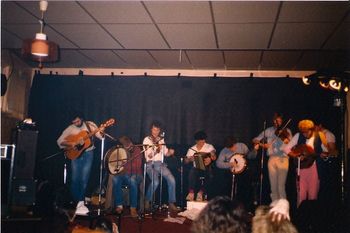 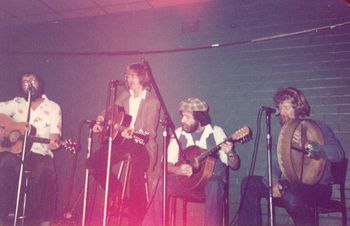 “Out of a very dusty shoe box in my very dusty office I discovered a safety copy DAT tape of Out on the Ocean, a cassette Poteen recorded in 1984. ”

To cut a long story short, Dave Walker and I met with Simon Polinski to get this delicate piece of history transferred onto computer and it was then remastered by Phil Georges.

It’s now available online and there are a limited amount of hard copies available. If you want to purchase  copy, just drop me a line and we can negotiate a very fair price. Its not bad btw!

Poteen was formed in Melbourne in the mid seventies, the music was solid Irish traditional and they performed at the first Port Fairy Folk Festival in 1977 and in the following three festivals.

On stage in 1977 were Irishmen Gerry Fennell, Paul Carroll, James Cooney and John Fitzgerald with Dan Burke the only Australian in the band.

Line-up changes were a regular feature of Poteen and in the early eighties the Irish component was for the first time outnumbered. By 1984 when they recorded the cassette ‘Out on the Ocean’ only two Irishmen remained, Paul Carroll and James Cooney. They were joined by Englishman Ian Francis, two young Australians Simon Melia and John Kiernan and John McAuslan from Scotland.

The band primarily were influenced by the great family musicians of the Melbourne Irish; The Fitzgeralds, McManuses, O’Neills, the Morans and by the huge Northern hemisphere revival of Irish and Celtic trad music with bands like Plaxty, Bothy Band, De Danann, Battlefield, Ossian, Boys of the Lough and many more.

The extra tracks included on the CD are taken from the Brunswick Recordings cassette of ‘Music of Migration’, a multicultural compilation recorded in one session by yet another lineup in 1986 which saw the departure of Ian Francis and the inclusion of fine Melbourne musicians Ken Maher on fiddle and Joe Paolacci on guitar and vocals. Poteen finally broke up in the late eighties, nobody is quite sure exactly when, but the musical partnerships continued with Simon and Ken as a duo called the Polkaholics, later joined by John McAuslan, who also performed in another duo with Joe Paolacci.

Many fine musicians passed through the ranks of Poteen in the 15 years the band were together.

Sadly some are no longer with us and to them, the remaining members of Poteen dedicate this recording - Simon Melia, Louis McManus, Joe Paolacci, John Kiernan and John Fitzgerald.