“Ger is an outstanding singer and guitarist, a musical journeyman born and bred in Ireland’s oldest city.” 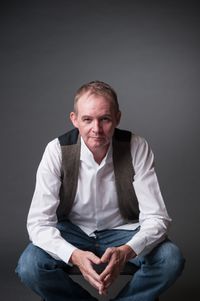 Ger Mythen is a native of Waterford, where he was dragged, kicking and screaming, into the world in 1967. Growing up in Ireland’s oldest city exposed him to a rich history and culture going back 1100 years. Naturally, music was a big part of this and Ger had started playing gigs as a teenager by the late 1980’s. By 1994 he had relocated to Melbourne and very quickly fell into the local Celtic music scene, playing solo gigs initially before being invited to join Irish Heartbeat, where he got to play with such luminaries as Fran O’ Connor, Greg Hunt, Pat McKernan, Mark McNeilly and Francis O’ Meara. A few years later, he found himself filling in with Kieran O’ Connell’s band Shanakee, which ultimately led to the formation of Too Rye Ay. This band burned brightly and shortly for a couple of years, which Ger fondly recalls as the “Glory Days”, including a tour to Singapore in March 1999 which was to light a spark that continues to this day.

In 2004, Ger bit the bullet and accepted an invitation to become the resident solo performer at Molly Malone’s Irish Pub in Singapore. He packed his bags and moved to the tropics for “six months or so”. He’s been there ever since. He still plays regularly at Molly Malone’s as well as several other prestigious venues around Singapore. His album, “She Moved Through The Fair” was recorded with a hangover in 2004 in Seaford, accompanied by some friends and a few slabs of Toohey’s Extra Dry, shortly before he departed for Asia. He’s slowly getting his head around the fact that he’ll be 50 in a few months and it’s time he made another record. It’s probably also time he grew up. We’ll keep you updated on both.

All tracks traditional, arranged by Mythen/McNeilly/Cooper except 1. Written by Ralph McTell and 2.Written by Davy Carton & Leo Moran
Recorded, mixed and mastered by Keith Rea in Seaford, Victoria, October 2004